With Stuck in the Middle and Bunk’d both ending, we’ve been anxiously awaiting the announcement of a brand new Disney Channel series to get excited about. And today, we’re thrilled to inform you that Gabby Duran & the Unsittables has just gotten a 12 episode order from the network!

The show will be based on the hit book series of the same name: 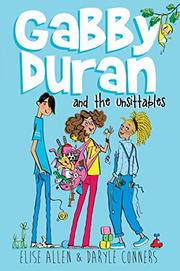 And the plot kinda sounds like E.T. meets Stranger Things! Check out the description from Disney Channel:

Gabby Duran constantly feels like she’s living in the shadows of her uber-polished, successful mother and whip-smart younger sister. She finally finds her moment to shine when she inadvertently lands an out-of-this-world job to babysit an unruly group of very important extraterrestrial children who are hiding out on earth with their families, disguised as everyday kids. Fearless and unapologetically bold, Gabby steps up to the challenge to protect these youngsters and their secret identities, and prove she’s the best babysitter in the galaxy.

The show stars newcomer Kylie Cantrall as Gabby. Back in March, Kylie guest starred as Tessa on Bizaardvark. You may have to wait until 2019 for the series premiere of Gabby Duran & the Unsittables, but click below to follow Kylie on Instagram and keep up with her acting, singing, and behind-the-scenes adventures!

EXCLUSIVE COVER STORY: Marcus Scribner
5 Things To Learn From “The Hate U Give”